Last Chance to get Moments From Within for free as an Ebook from Amazon It’s a collection of poetry and artworks, watercolour mostly, covering a wide range of subjects. It is a selection of poetry, lyrics and thought’s collected over the last thirty years so I hope you enjoy it. Some of it’s a bit teenage angsty, but what can I say. those that know me will be able to guess about when I wrote it. There’s a story behind each one.
Tommorrow will be too late as the free promotion only lasts till the 29th US time so get a wriggle on and download a copy.
Did I mention it was FREE
http://www.amazon.com/Moments-From-Within-ebook/dp/B007NR0NVO/ref=sr_1_1?s=digital-text&ie=UTF8&qid=1332988219&sr=1-1 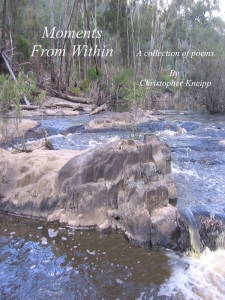 I have a new book out, a Collection of Poems and Art I have done over the last thirty years.
For a short time it is available free (Until the 29th March 2012) from Amazon as an Ebook. (Download Here)
Some of the poems can be read here on my blog, but why not go and download the complete Ebook now.
Please comment on anything you liked or didn’t like. (Hopefully more of the former than the latter.)
On a side note, Immortal Darkness, the second book of the Kasdtien Cycle, is coming along nicely. Book one, Parallel is also available, from the usual places. Any queries contact me HERE
cmkneipp@yahoo.com.au

Thanks again and enjoy,
Chris K

Okay, the five free days on Amazon for my novel Parallel is up and I’ve had a chance to look over the data. in five days my novel was downloaded by 322 different people. I have no idea who all of them are, barring a few, (Thanks Leni), they are strangers to me. This will be a good thing, if I can get even 5% of them reviewing commenting and otherwise spreading the word, then it may generate some interest.
I have thought long and hard about my dream of being an author, and it’s taken decades for me to realise what a slow climb it is at the begining.
To avoid obsessively watching the stats, I went bush for 4 days with my Brother in Law and an old mate of mine from Sydney. This may have been a master stroke for my sanity but it probably didn’t help by taking me out of the promotion loop.
None the less between Amazon and the previous versions on Smashwords I’ve manged to get about 500 or so copies out into the wide world.
This raises the question of Social Media and how I use it to promote the book, and my other writings.
I have accounts with Twitter and Facebook (though I’m still trying to work out how to create a page for myself as an author). I have accounts with Reddit, Stumbleupon, Goodreads and Digg but they are all new and I am still trying to work out the most effective methods of utilization.
All in all this is the early days of making the dream come true.
Two people have paid money so far to read my book and I am greatful to them. For me, selling my first book moved me from the status of Writer to the title of Author.
It’s a good first step.

For five days I am offering Parallel, the complete first book of the Kasdtien Cycle trilogy, for FREE (HERE) on Amazon.com. This is an extension of my experiment in self publishing and we’ll all just have to see how it goes.
So far, (In the first twenty hours) it seems to be moving along quite nicely, slowly clambering its way up the best sellars lists (for free books on Amazon anyway). I will be posting the results when it’s finished and I will be describing the mechanics of the Kindle Direct Publishing system in more detail in future posts. Until then I will continue to obsess over the stats during every writing break.
Book 2, The Immortal Darkness, is coming along nicely, and the expected release date will be in the second half of the year.
Thanks all of you have already downloaded the book from Amazon and I hope you enjoy it as much as I have creating it. Any comments or reviews, questions and the like are always appreciated.

Australian Traveller that loves to "Roam" our globe, creator of ENDLESSROAMING.COM sharing the experience through word and photography. Currently residing in my home of Newtown Sydney but hope to be back on the road late 2020. Feedback / questions are more than welcome, happy travels

Explore the world & get lost with louie

If you love travel, beauty and exercise, you're in the right place